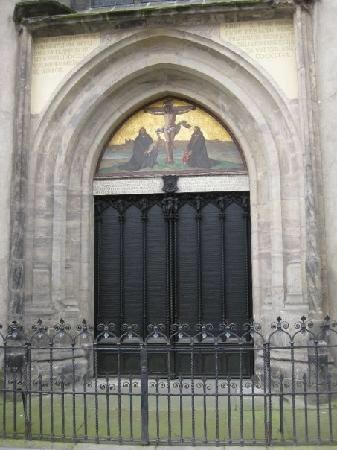 It has been 500 years since the German priest Luther nailed his 95 theses or propositions on the Castle Church door (above) at Wittenberg, Germany. Little did he realize then the far reaching impact of what he had done. The Reformation was born and Christianity and all of Western civilization was changed. The other night we watched online as one of our daughters participated in a very large Reformation anniversary celebration in one of the European capital cities. It was a glorious event. They even sang my grandmothers favorite hymn in their mother tongue. It was quite moving.

To celebrate this august occasion, I offer this quote from Church History in Plain Language by Bruce L. Shelley:

“Luther’s greatest contribution to history, however, was not political. It was religious. He took four basic Catholic concerns and offered invigorating new answers. To the question how is a person saved, Luther replied: not by works but by faith alone. To the question where does religious authority lie, he answered: not in the visible institution called the Roman church but in the Word of God found in the Bible. To the question – what is the church? —- he responded: the whole community of Christian believers, since all are priest before God. To the question — what is the essence of Christian living? —- he replied: serving God in any useful calling, whether ordained or lay. To this day any classical description of Protestantism must echo those central truths.”

And you know what? The Bible today still says the same things. Thank you Lord Jesus for the Bibles we have. It is really a miracle. Let us remember the men, such as John Wyclif and William Tyndall, who translated the Greek NT manuscripts into our mother tongue, so we, the common man, could understand what God had said.

Thank you for your time. God Bless you.